The Living Deadbeats    by Chris Walter 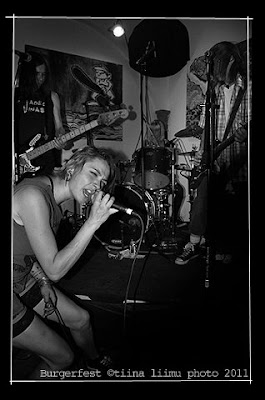 The Living Deadbeats are a high-voltage garage/punk band, packed to the nines with vitriol and adrenaline. Dripping with menace, yet passionate and even tender, the Vancouver-based outfit embodies the true spirit of rock n' roll. They might beat you up and steal your lunch money, but they'll do it with a wink and a smile. After all, who needs food when you can have rock n' roll?

In the spring of 2010, vocalist Lindsay, bassist Pete Fiend (The Fiends, The Finks), drummer Nadja (Joyce Collingwood, East Vamps), and guitarist Dirty Swagger (replaced by Geeza Wednesday in 2013), teamed up with  with the intention of doing something fresh and exciting. With eyes wide open, they built an original sound that drew on varied musical influences, yet remained faithful to late-70s LA punk. Finally, having scavenged the best parts of the Stooges and the Detroit Cobras to create a rock n' roll Frankenstein all their own, The Living Deadbeats were ready to take on the world. Or at least the West Coast.

The Living Deadbeats unleashed the monster by gigging around town, drawing the attention of the normally jaded music media. Kenneth Kambara of Rhizomicon commented that The Living Deadbeats were "tuneful garage punk n' roll with a grrrl attitude, reminding us of all the great things happening in the Vancouver music scene". Other accolades followed, including one from The Opposites Of Everything's Luis Zero, who said "The Living Deadbeats are the best punk band of the 21st century (so far)." In the process, singer Lindsay was favourably compared to Mia Zapata (The Gits) and Penelope Houston (Avengers), and even Exene Cervenka (X). Katherine Boothroyd wrote in Discorder Magazine that "their songs were short, fast, and loud. Great show!" Luckily, The Living Deadbeats are but humble rock stars, and the adulation did not give them swollen heads. First they had to cut a record or two.

These passionate and skilled practitioners of garage/punk rock hit the studio and immediately got to work. In 2010, they released two demo EPs. This led to an offer from Dirty Water Records (UK), who released "Hey Girl/Liar Liar" as a digital single, which got them some airplay. Not long afterwards, "Time" by The Living Deadbeats was included on The Best of the GaragePunk Hideout compilation series from GRGPNK Records (USA).

The band has just returned from a cross-Canada summer tour in support of their debut 12" album, which was released June 2012. German label F.A.M.E.D. Records has picked the song "Control Freak" for inclusion on an international 12" vinyl compilation in support of Russian band Pussy Riot, to be released September 2012.

The world might be going to hell in a hand basket, but The Living Deadbeats plan to ride that sucker all the way to bottom. For now, catch them at the best dive bars in town. And make sure to bring your lunch money. 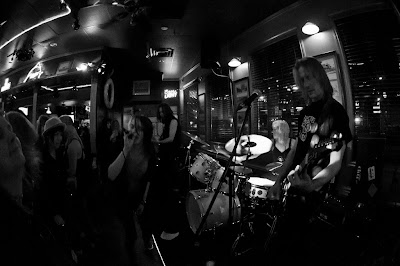 Chris Walter is a Canadian urban novelist,and has published 12 novels, his autobiographical trilogy, a collection of short stories, and biographies of Canadian punk groups Personality Crisis and the Dayglo Abortions.
Walter has also contributed to a number of publications, including The Nerve, Mass Movement, Razorcake, The Big Takeover, The Georgia Straight, Vice, Loud Fast Rules, The Republic, and Absolute Underground. He was featured in Prairie Coast Films' 2010 documentary Open Your Mouth And Say... Mr. Chi Pig, a film that looks at the life of SNFU singer Mr. Chi Pig.